Territory Standing is presented as reputation meters which can be viewed on the Map screen. Each Territory in Aeternum has its own individual Standing meter and level. Standing experience is exclusive to the Territory it is earned in. Once your Standing XP reaches a certain threshold, you gain a level and can acquire a passive bonus as a reward.

How to Earn Territory Standing XP?

Earning Territory standing is as simple as gaining Player XP while in that territory. This encompasses all forms of XP gain including killing enemies, gathering resources and crafting items. Any activity that provides XP will also grant Standing.

Some great methods for earning XP and Standing XP are as follows: 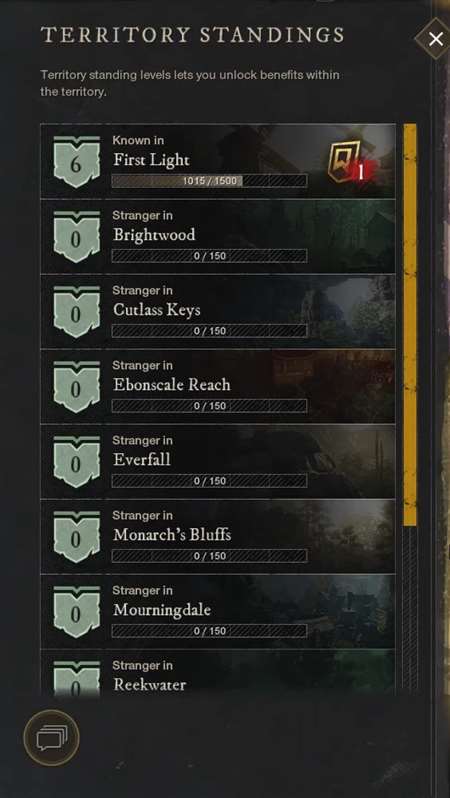 Every time you gain a Standing level, you can choose 1 bonus from a total of 3 or 4 option 'cards' per level. The choices are randomly taken from a pool of 10 possible rewards and each bonus will stack when acquired multiple times. Note that except for a couple of options, each reward card is subject to diminishing returns and will provide less and less of a bonus the more times it is acquired.

While there is a level cap of 300 per Territory and you have plenty of opportunities to earn Standing Rewards, you should still take careful consideration of which reward cards you pick first as some are more valuable than others and rewards cannot be reallocated. Continue reading below for a guide on the best Territory Standing rewards to acquire.

While each of the Territory Standing rewards provide some benefit, not all of them are created equal. And with a level cap of 300, maxing out Territory Standing per territory will take a massive amount of time, likely somewhere around a few months. So which rewards should you pick first in order to benefit the most from this system? It will depend on how you want to spend your time in each region.