Housing in New World is a gameplay mechanic that allows players to own a place of residence within the many Territories of Aeternum and their Settlements. Upon meeting certain requirements, players can purchase a House which they can customize and make their own with a wide selection decorations and furniture. Housing also aids players by providing several practical uses and quality of life improvements. This page covers all information on Housing and its related systems.

Player homes are a valuable long-term investment that players can take on to further cement their presence on Aeternum. Housing is primarily a cosmetic feature which ties heavily into the Furnishing line of Crafting Skills, allowing players to place crafted decorations and furniture. However, Housing also has practical uses and quality of life improvements, providing improved storage space within a Settlement, an incredibly useful fast-travel point and a location to place Trophies which confer several useful buffs and effects such as improvements to Crafting and Gathering yield, Offensive and Defensive combat boosts and many more. Players can purchase and decorate their Houses with a host of crafted furniture, ornaments and even pets that they find on their adventures. Houses not only offer a familiar place for players to return to after hours of adventuring but can also make their lives on Aeternum much easier. 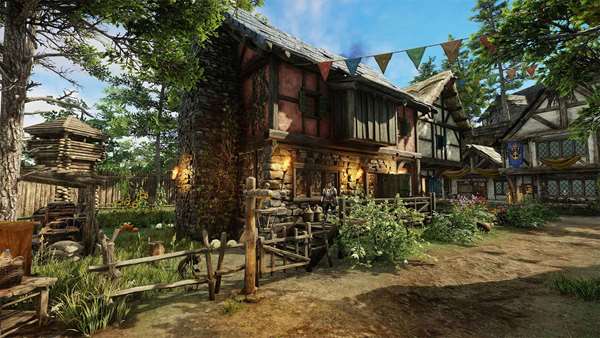 How to buy a House in New World?

In order to purchase a House, you will need to meet two requirements: Player Level 15 and Territory Standing Level 10. Note that this will only afford you the most basic Tier of Housing offers. Additionally, you will need to actually purchase the house with Coin - a cost which rises with each Tier of Housing. It should be noted that you can purchase a House in any Territory where you have reached the minimum Territory Standing, regardless of whether or not your Faction controls the territory. A player can have a maximum of 3 Houses at any given time, with the options to purchase additional houses unlocking at Player Level 35 and 55. 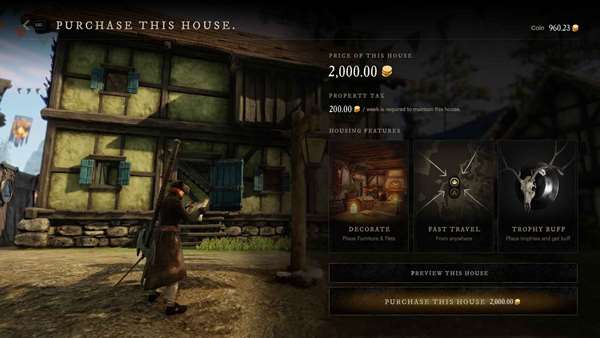 You can browse the Housing lots in each Settlement to find the house that suits your needs. When you find a house you are interested in, approach and interact with the prompt to open the Purchase Menu. From here, you can see the cost of the House and the Property Tax(more on this below). Before you purchase, you may preview the house in order to get a look at the interiors and features. Note that any number of players can purchase the same house within the same lot. However, Houses are instanced and players can only see their own house and decorations from a lot they've purchased a house in. In the case of other Housing lots, the house visible to the general public is based on a ranking system determined by decorations and furnishings placed, giving incentive for players to spend time making their Houses the best they can be.

The following table lists all Housing Tiers, their costs and Territory Standing requirements, as well as the amenities each tier provides:

The first time you purchase a House in Aeternum, you will be given a 50% discount. This discount applies to any territory and any tier of Housing, as long as you've never purchased a house before. For this reason, it may be worth saving your money and grinding your Territory Standing in order to save big on the highest tier Housing possible. The 50% first purchase discount will not apply to your weekly Property Tax.

Once your Standing XP reaches a certain threshold, you gain a level and can acquire a passive bonus as a reward. Every time you gain a Standing level, you can choose 1 bonus from a total of 3 or 4 option 'cards' per level. The choices are taken from a pool of 10 possible rewards and each bonus will stack when acquired multiple times. Note that except for a couple of options, each reward card is subject to diminishing returns and will provide less and less of a bonus the more times it is acquired.

In the case of Housing, you will need to acquire the House Ownership card in order to unlock Housing within a Territory. This card is exclusive to Territory Standing Level 10 and is a mandatory pick.

How to earn Territory Standing?

Earning Territory standing is as simple as gaining XP while in that territory. This encompasses all forms of XP gain including killing enemies, gathering resources and crafting items. Any activity that provides XP will also grant Standing.

See the Territory Standing page for further details on this progression mechanic aside from its Housing applications.

Similar to Crafting, owning a House in a Settlement will incur a Property Tax which is set by the Territory's controlling company. Each House has a base Property Tax which can be viewed in the Purchase Menu. This is modified by the tax rates set the by the controlling company. This tax must be paid weekly in order to maintain upkeep of your property.

Failure to pay the Tax will result in the disabling of most Housing features:

Property Taxes do not accrue and you will not be racking up a large amount of debt should you decide to take a break from the game and be unable to pay your dues. Instead, think of Taxes as a fee paid to access your Housing amenities on a weekly basis. As long as you are paid up for the week, you will retain all your Housing benefits for that week.

So, what can you do with your House?

A House is primarily a cosmetic feature, providing players with a personal space that they can decorate and customize to their liking. This is achieved with Furniture and Decorations. Most Furniture and Decorations can be crafted using the Furnishing Crafting skill line. There is an extensive amount of furniture and decorations that you can craft and many more that you can find as loot drops or quest rewards when you're out adventuring. Players can also place any pets they've collected on their journey in their house and can interact with them within.

You can decorate your house by interacting with the housing menu prompt either outside or inside your home. Every house is different, with varying amounts of space and amenities. Some houses have outdoor balconies or other such structural features that allow for further customization and furniture placement. Higher-tier houses are usually quite luxurious and spacious, allowing for the maximum amount of customizability. Higher-tier houses will also allow for the placement of more lighting-oriented housing items such as lamps and chandeliers. The amount of items you can place in your house can be improved by acquiring the Housing Items Territory Standing reward.

Note that failure to pay your weekly Property Tax will temporarily disable the ability to decorate your home.

Trophies are special types of furniture that can be placed around your home. Active Trophies provide persistent buffs and other beneficial effects for the player that improve certain aspects of their character. These effects work globally so you can place your trophies in your house in Windsward for example, but still benefit from their effects while in Monarch's Bluffs. Trophies can be placed using the Housing menu by interacting with the prompt either inside or outside your home.

Trophies can be divided into 4 categories:

Each category of trophy also has several different types. Players can place a maximum of 5 trophies per house regardless of the tier of House owned. Trophies with the same effects will not stack with each other when placed within the same house. However, these trophies and effects can be stacked when placed in different houses. For example, the Minor Loot Luck Trophy which provides 0.5% chance at finding rare items from chests and monster drops will not stack with itself if 2 or more are placed in your house in Windsward. However, place the same trophy in each of your houses in Windsward, First Light and Everfall and you can benefit from the total bonus of 1.5% increased chance.

Note that failure to pay your weekly Property Tax will temporarily disable all trophies placed in your home.

See the Furnishing page for a list of craftable Furniture, Trophies and more.

By far, the most practical benefit of owning a House is the Recall function which allows for fast-traveling to your home every few hours. Getting from Point A to Point B can be quite a hassle, especially if you're not looking to do much in between. There are fast-travel options in the form of Settlement to Settlement or Shrine to Shrine but these are limited in that you can only initiate fast travel while already at another Settlement or Shrine and the journey costs Azoth which increases with distance and your encumbrance. In contrast, Recalling to your home costs nothing and can be initiated from anywhere in the game world, similar to recalling to an Inn. The trade-off is the cooldown incurred when you fast travel this way.

Each tier of Housing offers a lower cooldown between Recalls:

Regardless of which tier House you own, the Recall cooldown can easily be circumvented by paying a small amount of Azoth and using this method is significantly cheaper than spending your Azoth to fast travel between settlements or shrines. Furthermore, your House Recall cooldown is separate from your Inn Recall cooldown so you can check in at an Inn in another settlement to have a couple of fast travel options.

Note that the Recall function is temporarily disabled if you fail to pay your weekly Property Taxes.

Another major benefit of owning a house is being able to expand your Storage Space by placing Storage Chests, which are special types of furniture that can house your excess items. Storage Chests come in several tiers and can be crafted via the Furnishing Crafting skill line. The higher the tier, the more storage space it provides. There is a limit to how many Storage Chests you can place in your House, up to a maximum of 4 chests for Tier IV Housing.

The following is a list of all craftable Storage Chests:

The additional space provided by Storage Chests is additive with your overall storage in a Settlement, which can be improved further by acquiring the Storage Territory Standing Reward. Furthermore, any crafting resources and raw materials placed in your Storage Chests are considered part of your overall storage for that Settlement and can be used automatically when crafting without having to move the items to your inventory.

Storage Space is disabled if you fail to pay your weekly Property Tax.

Other players may visit your House as long as they are in your party. A House can host a total of 5 players including yourself. Currently, this serves no practical purpose other than to show off your furniture, decorations and pets for your friends to admire.