Reekwater is a Location in New World, in east of Aeternum, with mob level 58-60. Each Location has different objectives that you can complete to earn rewards and complete the area.

Locations in New World are the various territories, areas and settlements found in the game. The main location of New World is an island called Aeternum, a supernatural island that holds a resource known as Azoth which draws in explorers from different regions. Aeternum is a land where natural beauty and supernatural impossibilities coexist. This page covers a list of the various Locations that can be discovered in the game.

"This vast, densely wooded, supernatural swamp was given the name “Reekwater” by fisherfolk, who gathered there to take advantage of the area’s many prime fishing spots. The name stems from the pungent and sickly sweet smell of decay that pervades the entire region. The original settlement, Bayou Village, was seen by its builders as a “new Venice,” built on the submerged ruins of an Ancient residential district. Those grand hopes were shattered with the arrival of the Siren Queen's flotilla and her rapid expansion of power. The settlers of Reekwater were forced almost entirely out of the territory—and those unable to leave or hide were dragooned into work crews for the Siren Queen. Her reach stretched across most of Reekwater, even as both she and her crew became Lost. Now, she has turned her sights on the Angry Earth, capturing them to drive her plans as she desperately searches for any way to regain her lost soul, an all-consuming quest that forces her to take greater risks for any chance of success. 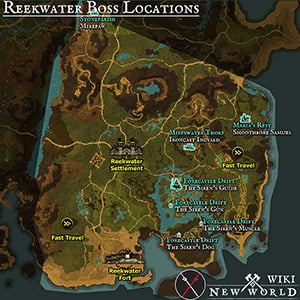 UNIQUE loot that drops in the area

Regions in the area

Group Areas in the Reekwater

Houses in the area