Restless Shore is a Location in New World, located in east of Aeternum, with mob level 41-46. Each Location has different objectives that you can complete to earn rewards and complete the area.

Locations in New World are the various territories, areas and settlements found in the game. The main location of New World is an island called Aeternum, a supernatural island that holds a resource known as Azoth which draws in explorers from different regions. Aeternum is a land where natural beauty and supernatural impossibilities coexist. This page covers a list of the various Locations that can be discovered in the game. 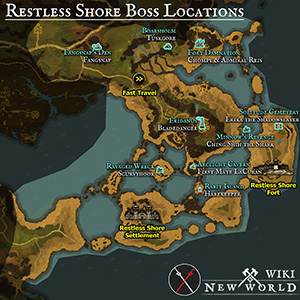 UNIQUE loot that drops in the area

Regions in the area

Expeditions in the Restless Shore

Group Areas in the Restless Shore

Houses in the area