The New World Wiki guides you through your exploration of Aeternum, a mystical land said to hide the secret of immortality. As you explore, you will discover beauty, danger, and opportunity at every turn. Bend the wilds to your will by hunting fierce beasts for food and crafting materials and harvesting valuable resources from the land to fuel your ascent to power. Leverage geographic advantages to control rare resources to accelerate the growth of your territory.

New World is an open world MMORPG that takes place on the fictional and supernatural island of Aeternum in the 17th century. It is set in an alternate-history in the twilight of the Age of Exploration and a “supernatural frontier” that attracts adventurers seeking the source of eternal life, a mysterious substance called Azoth. Players can scavenge resources in order to survive, craft items, discover settlements, claim territories, and to somehow rebuild on Aeternum. As players explore, they discover the “Corruption”, a malevolent force that twists and warps creatures and makes them hostile. These creatures are known as “The Corrupted” and are the main NPC enemies of the game.

Combine skill and strength in melee combat, attack at range with precision, or master arcane attacks. However you choose to fight, you’ll need to forge, discover, and customize powerful weapons to fit your combat style. In epic wars with other players or holding back waves of The Corrupted, your combat skills will mean the difference between life and death.

Unite players with in-game social systems that power organization, hierarchy, and command and control of formidable in-game Companies. Venture out with your own intrepid party to battle The Corrupted or to seize the land and treasure of your enemies. A thriving Company consists of master craftsmen, fearless soldiers, guileful traders, and strong leaders. Where do your strengths lie?

Everything You Should Know About New World

New World is an action MMORPG heavily based on combat. The basic and advanced controls will help players understand the combat mechanics of the game, although the basic combat mechanics are demonstrated during the tutorial part of the game, you can click here for more information about Combat in New World.

Each weapon provides different options and approaches to combat, allowing the player to deal damage in different ways.

Damage Type is an important part of combat as different enemies are vulnerable to different damage types. Choosing the right weapon will allow players to maximize their combat efficiency depending on the enemy's weakness. There are four damage types in New World namely Slash, Thrust, Strike, and Elemental. Elemental damage is a damage type that branches out different types of elemental damage that can be used on certain weapons and perks. These elemental damage types consists of Arcane, Fire, Ice, Lightning Nature, and Void.

There are certain weapons that deal multiple types of damage depending on the abilities and attack the player uses. Take the Sword for example, this weapon can deal Slash and Thrust damage, but other weapons like War Hammers can only deal a single kind of damage. Players can equip two weapons at any given time meaning they can quickly switch between these damage types and approach an enemy as they see fit.

In combat, you'll notice a yellow indicator will show up once you attack an enemy, this means the attack is hitting at full potential. The blue color will show up if it's not doing much damage or if it's weak against the enemy. Orange will show up if you manage to perform a critical hit, and white if it's a neutral attack.

The Importance of Crafting in New World

Crafting is the ability for you to create Equipment and Items in New World and it consists of seven professions. Each of these professions are related to the type of Equipment or Item you will create including the Crafting Stations. The seven professions are: Arcana, Armoring, Cooking, Engineering, Jewelcrafting, Furnishing and Weaponsmithing. Arcana focuses on crafting Magical Weapons such as Staves. Additionally, Arcanists can craft Potions and Tinctures which are consumables that can provide a variety of effects such as health and mana restoration, buffs and removal of harmful effects such as poison. Armoring allows players to craft both Armor and Storage Bags. Cooking focuses on making Meals and Drinks which offer a large variety of boosts including warding against certain enemy types, improved health or mana recovery, bonuses to crafting yield for other Crafting skills and many more. Additionally, Cooks can craft Dyes used to color parts of Armor. Engineering is used to craft Ranged Weapons such as Bows and Muskets as well as the Ammunition for them. Jewelcrafting focuses on crafting Trinkets such as Amulets, Rings, and Earrings. Jewelcrafters can also craft Gems that can be affixed to equipment with sockets. Furnishing focuses on making Furniture, Storage and Trophies for player housing. Weaponsmithing focuses on crafting Melee Weapons such as Swords, Rapiers, Hatchets, War Hammers and Shields. You can only level up each profession by crafting. Improving a profession will allow you to unlock new recipes as well as to craft higher tier items.

Crafting Recipes are a set of ingredients you can use to create different types of Equipment and Items. Certain recipes will require you to obtain the proper ingredients as well as reach a certain level of profession.

Leveling up Crafting skills is done by continuously crafting items of the Crafting skill's type. By leveling up a certain Crafting skill, you will unlock more recipes, as well as more powerful versions of already known ones. A higher crafting level will also provide certain bonuses depending on the skill and items crafted.

In order to craft an item, besides the required Crafting Skill, you also have to be in the right place. Settlements have most, if not all, Crafting Stations and Refining Stations available for you to use at your pleasure and level up the Skill tied to the respective Station. For example, to craft a Sword, besides having the required Weaponsmithing level demanded by the sword's recipe and the Materials, you would also need to be at a Forge of the correspondent level. 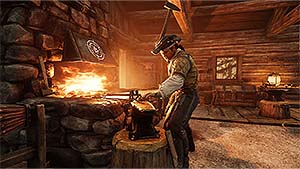 There are also five Refining Stations in New World, which are special buildings that process Raw Materials into Refined Materials, granting them different properties, and allowing them to be used in different Recipes or even Crafting Stations in order to create special Equipment. These five Refining Stations are: Loom, Smelter, Stonecutting Table, Tannery, and the Woodshop. At the Loom, you will be able to create Cloth Materials. These are primarily used at the Outfitting Station. At the Smelter, you are able to turn Ores into different types of Ingots. There are primarily used at the Forge to create different types of Shields, Weapons and Armor. At the Stonecutting Table, you are able to turn Raw Gems into Cutted Gems. That, once cutted, can be used to slot into different types of gear, enhancing its properties. At the Tannery, you are able to tan the skins taken from hunted animals. Once completed, they can be used during the creation of Armor or Furniture. At the Woodshop, you will be able to turn Woods into different refined materials, such as Timber. They are primarily used at the Workshop.

For Crafting skills that create consumables, increasing the skill level can improve resource efficiency, yielding more items for the same amount of ingredients. For example, a beginner Arcanist will craft Healing Tinctures at a 1:1 ratio while an advanced Arcanist will have a chance of producing more tinctures per crafting attempt. This increase in efficiency becomes more evident when bulk crafting is performed, where you can see up to a 30% increase in crafting yield for the same amount of resources.

While you're crafting a piece of Equipment, there's a small chance of gaining one or more Perks or an Empty Gem Socket. While these outcomes are random, you can use the special resource Azoth during the crafting process to improve the chances of getting perks, a socket or both. Additionally, there are a large amount of special resources that can be gathered in the world that, when used during the crafting process, can dictate what Perk is added to the piece of equipment. Remember that there's no guarantee that a Perk or a Gem Socket will be added to the Equipment you are crafting but the chance will increase as your crafting skill level increases.

What are the Enemy Types in New World?

There are five different enemy types in New World, all having their own strengths and weaknesses. It is important you know the resistances and weaknesses of each enemy to know how what type of weapon or skill you need to use to counter them. 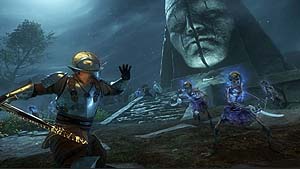 The Ancients are shown as skeletal figures that you'll find surrounding old buildings and ruins around Aeternum. They are resistant to Fire and Slash damage but are weak against Lightning, Strike, and Void. 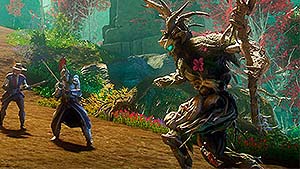 The Angry Earth are creatures made of wood and other natural elements from Aeternum who consider the presence of others as infection. They are resistant to Lightning and Thrust damage but are weak to Fire and Slash. 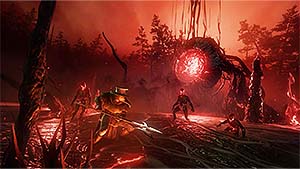 The Corrupted are one of the main antagonists in New World, they tend to show up everywhere in Aeternum. They are resistant to Ice and Strike damage but are weak against Arcane, Nature, and Thrust. 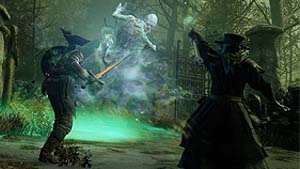 The Lost are the ghosts and undead you'll encounter on Aeternum. They are resistant to Thrust and Void damage but are weak against Ice, Nature, and Strike. 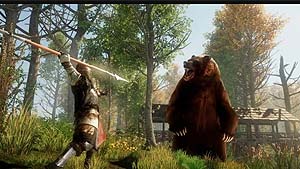 The Beasts are the wild animals you'll come across Aeternum and they can also be found everywhere. They can range from wolves, bears, boar, bison, wild cats, etc. They are not resistant to any type of damage but all of them are weak against Thrust damage.

Check out our other Wikis: